Last night, I woke 90 minutes after going to sleep with quite a stomach ache.  I immediately suspected my dinner of tempura shrimp, as it did not seem all that fresh and the supposed-to-be-light tempura batter was a shadow of what it should be.  Within 15 minutes I was “tossing my cookies” but after one bout, was much better for it.  I woke this morning feeling almost 100% and did a 2 mile run with a plan to run home from work.

There’s something about working 8 miles from home that makes a run home more satisfying than the 6 miles or 4 miles of my previous workplaces.  I’ve migrated in the last 4 years from Yonge & St. Clair to Yonge & Eglinton and now, York Mills and Yonge.  The average travel time is about 45 minutes.  I guess it is the super-time-saver me, that rejoices in saving 45 minutes! Especially when the 45 minutes in question are spent in a subway, on a subway platform or transferring at Yonge station.

As I started out, rain began to fall but thankfully let up.  There are two major hills in the first two miles, heading south on Yonge.  The infamous Hogg’s Hollow hill and a hill that starts at Lawrence.  After those climbs, there is great satisfaction in knowing it is downhill most all the way, wheeeeee!

I have to confess that I broke my moratorium on shopping when I went by Foot Locker.  I have had my eye on a pair of boots manufactured by an athletic company.  I asked if I could pay for the boots and pick them up tomorrow but they said it would be better if had them put aside and paid for them upon pick up.  Some sort of technicality about absolving themselves of responsibility for property that is no longer theirs.

A couple of years ago I bought a pair of very sturdy, sensible looking Geoxx boots but they were a disappointment in that the soles had no grip in spite of being rubber with the appearance of heavy treads.  I sprained my ankle that winter, while wearing those boots.  I’m putting my faith in a athletic shoe company to have a real tread, not a fashion tread.

When I left the store it had begun to rain again but lucky me, in 10 minutes it let up once again.  It was truly invigorating to escape the sardine-like conditions of the subway and I felt as though I was flying, in the dark, running downhill.  I started my speedwork when I hit St. Clair, and turned west.  My total fast running was roughly 15 minutes.  With sections of 2 1/2 minutes running quite hard.  It is a lot easier to run fast in the evening, than early morning.  Particularly after sitting at a desk for 7 hours.

It struck me that this 8 mile route is very similar to the last 8 miles of the Boston marathon with the two major hills and then the very fast, final 10K.  What a great simulation route.

The run was entirely satisfying and when I got home I cooked up some pasta and had my dinner while soaking in the tub. 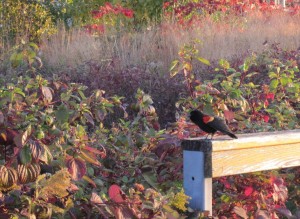