It is taking me awhile to process the experience of crossing the finish line at the Boston Marathon at 2:39:20 p.m. – 10 minutes before the explosions went off at 2:49:43 p.m. 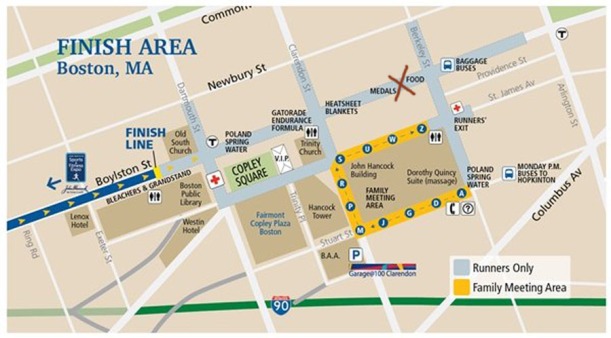 Runners are greeted at the finish line by officials whose  job is to make sure they move along quickly through the post-finish line area which spreads over three city blocks. This process includes; recovery drinks and water, getting a heat sheet blanket, a sticker to keep the heat blanket secured, a medal, the option of a photo while wearing the heat sheet blanket and medal and then a bag of food. I did all of the above, except for the drinks in those ten minutes.

Just after receiving my bag of food explosions were heard and a very large plume of smoke rose to what seemed like 20 stories high. It appeared to be at least a mile away. My sense is that we were all thinking “this can’t be good” but were hoping that it might be simply be a gas explosion. Nobody wanted to believe that it could be something more sinister.

An integral aspect of the Boston Marathon experience is the spectators. Having been buoyed by their support all the way, I now realize survivor guilt is inevitable. The rational question is “Why anyone?” but as a benefactor of the incredible enthusiasm and cheer-leading at Boston the question for a participant becomes “Why so many spectators when they were only there for us?”.

Somehow the mayhem did not immediately spread two blocks past the finish line.  We did not hear a chorus of sirens wail, leading one woman to echo our hopes (or state of denial) when she said, “It’s funny that there aren’t more sirens maybe that means its not serious.”  We saw one or two officials run towards the finish line but without giving us any direction. We had no idea what was going on. The roar of the crowds at Boston are deafening. I think I will always ask myself why we were not able to make out that the screams of encouragement from two blocks away had turned to screams of anguish, pain and terror.

We finishers continued,  albeit with some anxiety, with the usual post-race routine, the next step to pick up a checked bag. My checked bag contained items that I was willing to leave behind should the line-up be overlong.  I have a cache of old gear saved expressly for this. My habit with out-of-town marathons is to stay at  hotel within reasonable walking distance to the marathon finish should I decide to skip picking up my baggage and have just a heat blanket to keep warm. I still considered picking up my bag as there was still no sense of panic in my immediate area. I walked by the baggage bus and saw that there was a line-up of 6-7 runners for my bib number sequence (which by usual standards is quite reasonable) but decided that it was sensible to skip the baggage check. I walked quickly out of the runner-only area eager to reunite with my husband asap.

Our hotel was 1 mile from the finish line and our meet-up plan was a street corner enroute to the hotel. The understanding was that if he was not there, I would likely head back to the hotel and message him. At the best of times, nothing is more unpredictable than trying to connect with friends and family after a marathon, especially when you are away from your home city. The chaos and worry that ensued for all those who were more immediately affected by uncertainty in reuniting must have been grueling. 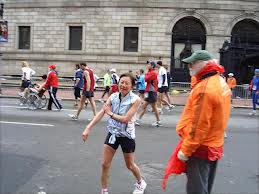 My mental construct was that my husband may have seen me cross the finish line and be walking parallel to me on the sidewalk toward the exit to the runner-only area or our meeting spot. I drew this image from 2007 when I was spotted by a friend just after I finished and she took a photo from the sidelines. Since I did not realize how close the blast had been this image did not cause me to worry. I walked over to our meeting spot and my husband was not there so I walked quickly back to the hotel where I immediately emailed him.

After this an email arrived which included a link to a photo from the devastation at the finish line. I was then that I became aware of what had happened.

Thank you for all your concern and care. I deeply mourn and grieve for the loss of life and injury suffered by so many at the Boston marathon. My heart and prayers go out to their friends and families. The spectators at Boston are one-of-a-kind and exemplify the best of American exuberance, civic pride and love-of-sport. As a runner whose spirits have been buoyed by the unbelievable cheer-leading of Bostonians for a fifth time, the fact that spectators were a target adds yet another element of tragedy. If city dwellers everywhere could rise to the level of support and celebration that exists at Boston, cities everywhere would be better for it. Boston, we feel your pain. 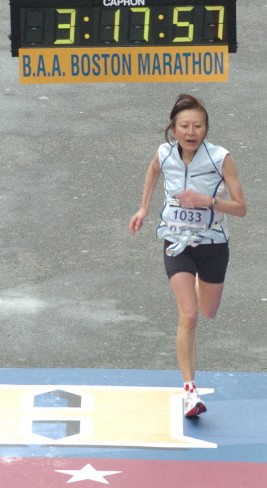 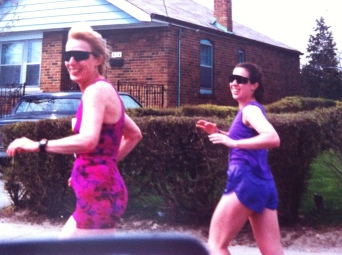 Running a first marathon with mom

Before I met Amy, the author of this blog post, I met her mom, Jeraldine Ballon. But the circle has closed and now Amy and I are members of the same track club. Knowing something of what the Boston marathon means to her, I asked her to share her very special memories of her mom and their shared love of running. Here is her beautiful story.

It has been 12 years since I last ran the Boston Marathon, but this time of year still brings back many memories of Boston and my mom. Of the 10 marathons my mother ran between the ages of 51 and 56, four of them were Boston. This is her story of becoming an athlete, and her road to Boston. 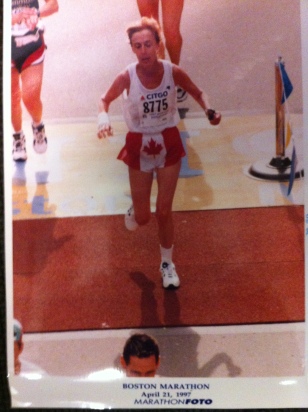 Always the last kid picked to be on a team, I don’t think my mother thought she had an athletic bone in her body. Plus, as someone with a penchant for beer and potato chips who happened to be rail-thin, she may not have thought that she even needed to exercise. Everything changed when she won a membership to a posh, downtown Toronto gym. I remember the day she went in for her fitness assessment in a pair of sparkly sneakers she’d purchased on vacation at a K-Mart because they were the only ‘runners’ she owned.

The positive experience she had in the gym quickly snowballed and she fell in love. Not only did she enjoy watching her body grow stronger, but she discovered running. Her goal of running a marathon followed soon after and she planned to run the New York City Marathon. As I stood on the sidelines that day, both our lives were changed. My mom was hooked, and I was inspired. I promptly began training for my first marathon

Together we ran marathons in Toronto, Chicago and Washington. My mother also went on to run Paris. Our times decreased and our love of running increased while we logged hundreds and hundreds of training miles together. My mother started to get really fast, consistently winning her age category. I counted myself lucky to have this special relationship with both running and my mother. 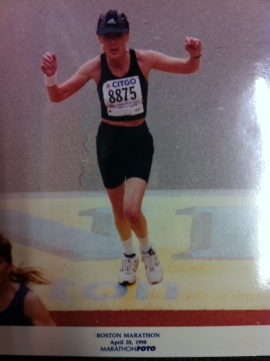 And then there was Boston. My mom ran Boston in 1997, 1998 and 1999. And she ran with me after I qualified in 2000. Boston in 2000 was also special because it was just six months after her hysterectomy. She had had emergency surgery after cancer had been discovered in her uterus. Funny enough, it was her running that led her to self-diagnose. Her training had made her so aware of what was going on in her body, that went things started to feel ‘off’, she advocated for herself very quickly. She was treated, given a clean bill of health, and a 98% survival rate.

Things were good that fall: I was newly married, newly graduated from business school, and working in a great job. Training for was going well too, until one day when my mother told me that she didn’t think Boston 2001 would be in the cards. She wasn’t feeling well.

A few months later her worst suspicions were confirmed: Against the odds, the cancer had metastasized and her body was riddled with it. She was told that she had a few months to live. Nothing could be done to treat her.

In April 2001 I traveled to Boston with my husband, my dad and my mom who came to support me. My mother was not in great shape. It took a lot of effort to walk even a block or two. But she managed to score three passes to the finish line seats on the bleachers on Boylston Street. (Thank you, Adidas!) That was not an easy race. Heartbreak Hill took on a new meaning for me that day. Choking back my tears, I saw my family in the stands as I crossed the finish line. Boston was the last trip my mother took. She died a few months later.

Losing my mom was the worst thing that has ever happened to me. But how lucky am I that I had a mother who, by inspiring me, introduced me to running and changed my life? How lucky am I that I got to run the Boston Marathon with my mother? How many people get to say that? 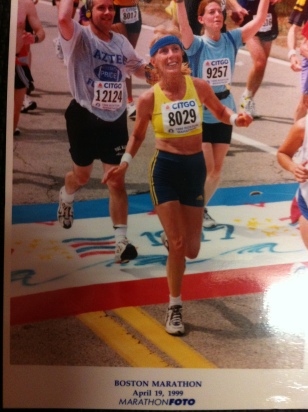 I haven’t run Boston since that year, and in fact took a ten year hiatus from the sport. But I have started to run again. Who knows, maybe I’ll be back on Boylston Street one day; maybe with one of my own daughters. One thing I know for sure: When I run now, the inspiration my mother provided is right there with me.