I’ve been running long enough to remember when treadmills were an exotic species of gadget, used almost exclusively for tests administered by exercise physiologists.  I”m not sure when they started to become part of your standard gym equipment but thank goodness for that.

Over the past month I’ve done two 18 milers and both were done on the treadmill at my local YMCA due to very messy weather with treacherous footing. I’m an old hand at treadmilling but over those runs I learned a new trick. I can READ and RUN at the same time! If I set the font size on my Kobo reader to large, I can read without any difficulty. This is quite a discovery for someone who is trying to make it through the 1200+ pages of Les Miserables. I’m now 48% of the way through.

A cautionary note here. I think I can easily manage this feat as not many people have logged as many treadmill miles as I have. My theory is, that since running is second-nature for me and requires very little concentration, the door is open to multi-tasking. I think some of the findings presented in Thinking Fast and Slow by Nobel prize winner, Daniel Kahneman would support my view. Nonetheless, one should not get too cocky. Last fall I stumbled and fell on a treadmill and was hurled off. Thankfully I was not going very fast. I can’t imagine what would have happened otherwise. Wearing the safety catch while on a treadmill is a good idea. 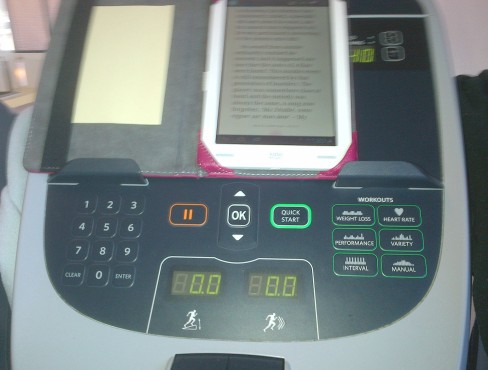 For the latest 18 miler I did this. For the first hour, I listened to Thinking Fast and Slow, the audiobook. I own the hard copy of the book but had stalled at page 135 and knew that I needed the ease of the audiobook to get me back into it. I would like to have the “reader” option but three options for one book, seems excessive not to say, expensive. The book is a bit demanding so I knew that after the first hour, switching to Les Miserables would be in order. For the third hour, I listened to music. The week before I looked at all the “tags” I had collected on Shazaam, the music identifying app, and downloaded those from www.legalsounds.com for a pittance. It is always motivating to run with new music in hand.

No,it has not been easy getting geared up for winter marathon training, most of it on my own, but thank goodness for all these toys!

Indeed! With seven weeks before the Boston Marathon I’m heading into the heart of marathon training. In addition to 60+ miles of training a week, a number of other activities are keeping me busy. But first a running update. 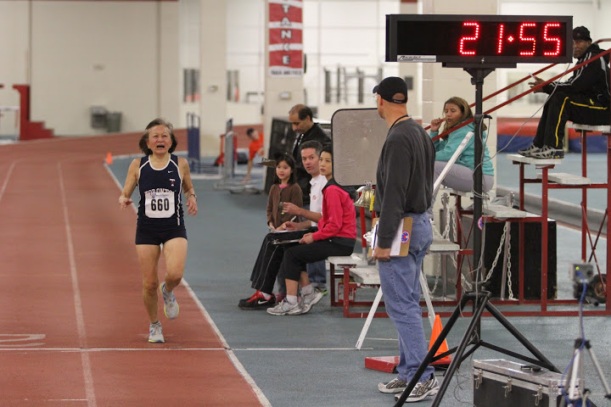 *The Look* On the verge of death or childbirth? I think I need some finish line coaching from Usain Bolt.

A few weeks back I set a Canadian age-group record for the indoor 5K. It was “low-hanging fruit” as far as records go but as one friend said I’m sure it was delicious nonetheless. I ran 21:55 – breaking the old mark of 26:14 held by Gossette Radlein since 2008. Tomorrow, I’ll be running another indoor 5K so it looks like I will be running to lower the Canadian record 🙂 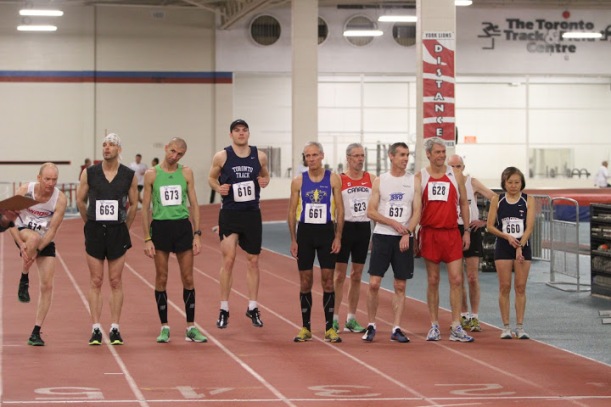 The 5K was an invitational race with athletes of all shapes, sizes and ages, and just one woman. That would be me. I’m not sure what the logic was of putting me in the best starting spot, the inside track, so to speak, perhaps that was the spot where it would be least likely for someone to trip over the vintage 1955 wannabe record chaser. 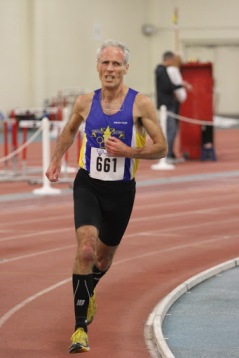 Jerry, the class of the field.

A couple of other records were broken in the race. Jerry Kooymans broke the men’s 55-59 record and Jack Geddes ran 23:29 – breaking the record of 27:46 held by Whitey Sheridan in 1991. I was happy to take the record down to a respectable level, a solid national class time (equivalent to about 17:40 were I in the Open category). 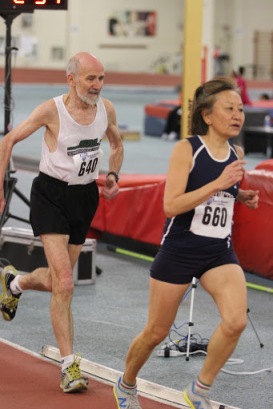 Setting the pace for a 75 yr. old record-holder.

Jerry on the other hand is the crème de la crème of masters running in Ontario, an international caliber athlete who has been competing his whole life and still holds records for the Princeton team. Jerry ran most of the way by himself, finishing in 16:44. He broke the old record of 17:27 held by Robert Jackson set in 2011. Jerry is just a few months older than me which makes me an expert in knowing when he enters a new age-category. 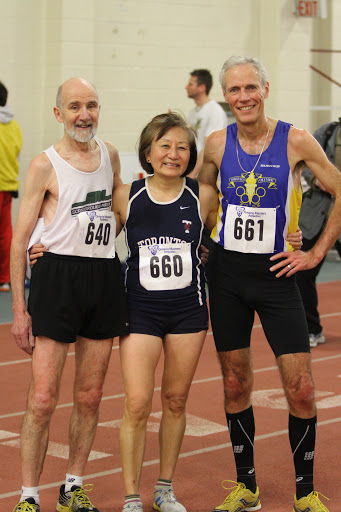 This blog post has filled up rapidly thanks to all the great photos courtesy of Doug Smith of the Ontario Masters Track and Field Association. So I’ll have to elaborate on my other activities some other time. As far as that goes, let’s just say that Ethiopia is on my mind.

My To Do List for the Next Ten Weeks