Listening to Murakami’s book has been cause for some reflection on how running became such an integral part of my daily routine.  In addition, I’m asking myself, how is it that I have somehow also acquired the “habit” of blogging.  There are clues to be found in the life I led as a 12 year, almost 13 year old.

I was given a journal Christmas of 1967 by my mother and thereupon began 20 years of keeping a journal.  The journal keeping ended when I became a mom.  Life just seemed too busy and immediate, that I did not have the desire to mull over the contents in writing.  Not that I did not reflect on my life, as in fact, that is a lot of what I do when I run. 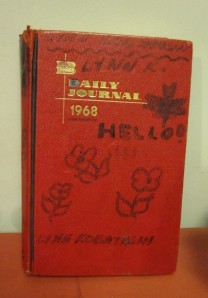 As a child I was not in any way precocious but I was extremely active and involved in all kinds of games and sports.  I had forgotten how so.  In my journal I drew pictures to illustrate my entries including pictures of a new hockey stick, a high jump made by my dad, a baseball bat, a basket player and much more.  I noted, every single occurrence of gym class and all viewings of hockey night in Canada. 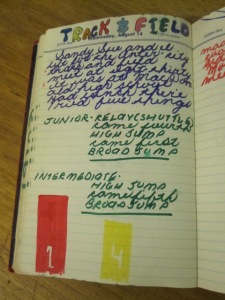 Because of my dad’s makeshift high jump, high jumping became a neighbourhood sport and I was the champ.  Thus, when I attended my first track meet, an inter-park affair, I placed first in my Junior age-group.  Our park, was a very small park and I was the only first place finisher.  I remember being feted quite thoroughly for this, nearly carried home on the shoulders of my teammates, or at least that is how it felt 🙂

I should mention that one of the first conversations I had with Friend 2 from yesterday’s blog involved the discovery that my favourite girlhood sport of high jump, was her most despised sport and sports in general are not her thing.  In spite of finding a certain camaraderie with sports-mates, most of my female friends generally fall into the category of being non-athletes who read a lot.  Although an active child, I did love to read and was the youngest volunteer at the local library.  I diligently worked my way through the biography section in alphabetical order and more.

I’ve kept a few of my journals, but thrown out those from age 20 to 32 as my only interest in them seemed to be worry that they might be read, so out they went.  Maybe tossing the records of the brooding days of my twenties is related to Rainer Maria Rilke’s advice in Letters to a Young Poet.

“…have patience with everything unresolved in your heart and to try to love the questions themselves as if they were locked rooms or books written in a very foreign language. Don’t search for the answers, which could not be given to you now, because you would not be able to live them. And the point is to live everything. Live the questions now. Perhaps then, someday far in the future, you will gradually, without even noticing it, live your way into the answer.”