To those unfamiliar with the award structure of most races/fun runs, medals or prizes are often awarded for the fastest in age-group categories.  Hence, those who make it their business, to try and run fast, find satisfaction in a birthday that propels them into a new category.  With the diminishing returns on speed that comes with aging, it is easier to place in your age category when you are at lower end of the age range.  The past week I crossed this threshold, which as it loomed on the horizon, did stimulate my competitive instincts. 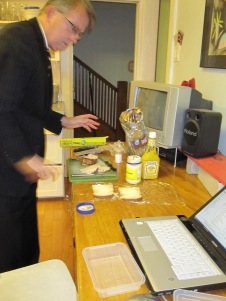 The celebratory evening started with a reception at the Rouge Concept Gallery at Queen and Broadview.  The event was a kick-off for the Philip Aziz Centre’s capital campaign for their children’s hospice.  We had a nice chat with Deb Matthews, the Minister of Health and long-term care.  She told us that she asked George Smitherman what work did he feel was left undone, he replied palliative care. In addition to potentially providing a more humane place to live final days, hospice care, is also cost-effective.

George Smitherman attended a gala for the Philip Aziz Centre, a few years back.  During his time as Minister, he had identified a gap in palliative care and hospice care and committed funds to hospice organizations.  The children’s hospice, the first in Toronto, believe it or not, would not have been possible without his support.  I was also impressed that he took the time to attend our very small gala of 150 guests.  At the time I was involved professionally with a super-sized gala with 4000 guests and we were not able to have him drop by.  He told the small gala group, that this was a project that he supported wholeheartedly.

I find it interesting that Smitherman is categorized as being in the same boat as David Miller without any distinctions.  People forget that he was the campaign manager for Barbara Hall when she lost to David Miller in 2003 mayoralty race.

From there we went to the new Oliver and Bonacini Café Grill restaurant at Yonge and Front for a birthday dinner.  We had a reservation and were shown to one of the best tables in the house, a booth.

On our table was a bouquet of cellophane-wrapped roses.  With all due respect to my husband, it never occurred to me that he would have thought to coordinate the appearance of roses in this manner.  When prompted that there was a gift card on the bouquet that I should read, I was amazed to find a birthday greeting.  I confided my reason for astonishment and he confessed.  When he made the on-line reservation, a pop-up window appeared asking if the reservation was for a special occasion for which flowers might be needed.  Nonetheless, the flowers were a very nice touch indeed.

The menu is very well-priced with personal pizzas and burgers at $13, the same pricing as our beloved-local-verging-on-grungy pub.  Of course, the menu extends beyond pub fare but many of those items are still under $20, which is much the same as most College street restaurants.  Service was superb with the only complaint being that the music was a bit too loud and boppy.  However, maybe we are just a bit too old, and out of their target-market-age-group. We are part of a wonderful marriage enrichment group and we spent time while awaiting our dinner, composing a letter to a couple who are attending their first weekend retreat.

When asked what I wanted for my birthday (at the risk of sounding like a saint), I said that I wanted to make a donation to the PAC capital campaign.  I really do have everything I need and feel very grateful for a good life.

Happy birthday to me!

LUSH gift box from my son