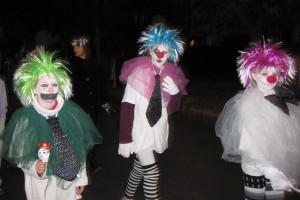 So here in our neighbourhood, there is always a special parade, complete with police escort. Lucky for us, it passes right in front of our house and we are often home for this frightfully, cheerfully, dreadful pre-Halloween event.  Suggested attire is black and white.

The parade is the work of the Bread and Puppet Theater, with the start and finish in that happening-park, Dufferin Grove.

I’ve spent a good part of the day learning a few new things including, how to convert movie files, how to edit movie files and signing up with Vimeo, a Youtube-like web service, where I can house my videos. Once the video is uploaded there is a delay, in accessibility as the video has to go through the approval process.

I’m pleased with the footage I got of the parade but I think this delay means, that its debut will have to wait until tomorrow.

As for Halloween, we were on the ball this year, with pumpkin and candy bought well in advance. Last year, we spent Halloween afternoon sorting through various rotting pumpkins and finally shopping at Walmart for a plastic pumpkin. Anyone who has been to Walmart at Dufferin mall on a Saturday, knows it is the last place in Toronto you want to be any Saturday, let alone Halloween Saturday.

I was pleased with my pumpkin creation, a salute to the very happy memories our family has of Tim Burton’s classic animated feature, The Nightmare Before Christmas. 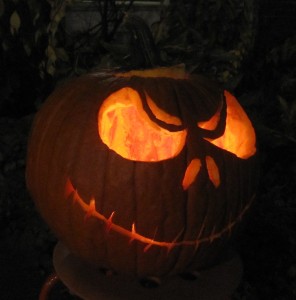 And finally, everything worked out just fine.
Christmas was saved, though there wasn’t much time.
But after that night, things were never the same—
Each holiday now knew the other ones’ name.
And though that one Christmas things got out of hand,
I’m still rather fond of that skeleton man.
So many years later I thought I’d drop in,
and there was old Jack still looking quite thin,
with four or five skeleton children at hand
playing strange little tunes in their xylophone band.
And I asked old Jack, “Do you remember the night
when the sky was so dark and the moon shone so bright?
When a million small children pretending to sleep
nearly didn’t have Christmas at all, so to speak?”
And would you, if you could, turn that mighty clock back
to that long, fateful night, now think carefully, Jack.
Would you do the whole thing all over again,
knowing what you know now, knowing what you knew then?”
And he smiled, like the old Pumpkin King that I knew,
then turned and asked softly of me, “Wouldn’t you?”

One thought on “Night of Dread”