It occurs to me that like doing “minutes” writing about a race experience is a lot easier when done right away.

My state of mind at the halfway point was very good. I tried to focus on each mile and I felt hopeful that I might be able to go under 3:40 which was my dream goal. I found myself looking forward to hitting the 20 mile point and proving to myself that I would NOT hit the proverbial wall.  I wish I could give a blow by blow account of my splits but my inability to read the fine print on tattooed on my wrists created a bit of confusion.  In spite of running well within my heart rate comfort zone for the first half of the race, my pace slowed through the race.

Before the 20 mile mark I realized that the race bib pinned to my shorts was a bit askew.  I was worried that this might result in no race photos as they used the bib number as the identifier.  So, for the second time I had to undo the four safety pins and attach the race bib to my sports bra.

My average pace for the first 5.9 miles was 8:08 and I slowed to 8:16 between 5.9 and 13.1 miles.  From 13.1 to 20 miles my pace was 8:23  and then the most dramatic slowdown was between mile 20 to the finish where my pace averaged 8:55.  It didn’t feel like I had slowed that much because I passed 277 runners and was only passed by two runners between mile 20 to the finish. One of the two runners that passed me was a guy who was pacing a young woman, the other runner that passed me. 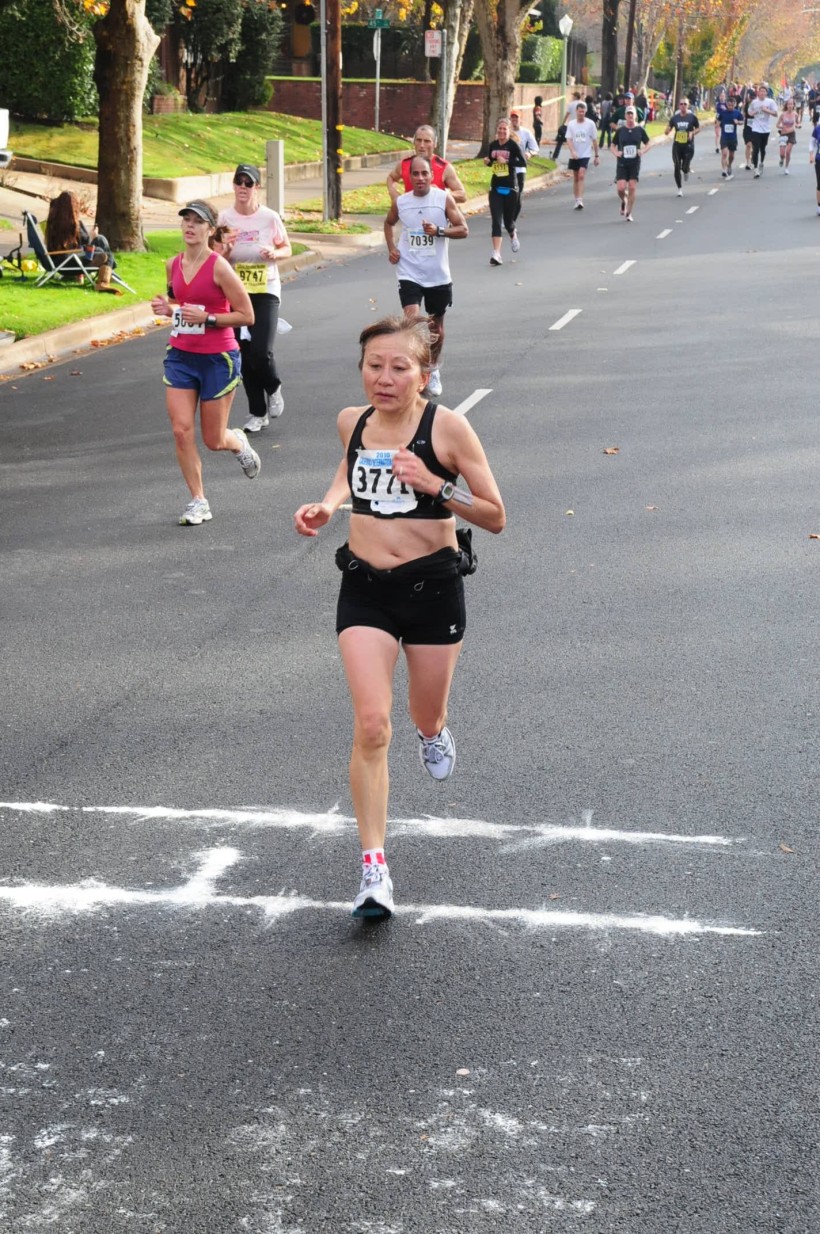 So at some point after 20 miles I realized that I was not going to go under 3:40. I worried that I might not go under 3:45 but although I was getting slower, I pushed harder. My heartrate monitor had gone on the blink around mile 20.

Around mile 22 I passed a woman with grey hair who I thought might be in my category and indeed that was the case. She ended up finishing a couple of minutes behind me. I dye my hair so it might not be so easy for another 55-59er to spot me from the rear.   The fact that unlike the open men or women, age-groupers can’t tell who their competition is fairly odd. In triathlons, age-groupers have their age-group written on their legs.

Around mile 24 I passed by a water station where every single marathoner was walking. It was in fact, a little hard to get through that section. I find it surprising that so many people, slowed more than I did. I guess I’m used to running with a faster, more experienced crowd and relative to my time, I have far more experience with the distance, than the 3:40+ marathoners I was running with.

I wish I could have something dramatic or funny to say about the race, like the author of What I Talk About When I Talk About Running who found himself counting the dead cats and dogs when he ran the original marathon route in Greece. I suppose the lack of drama in my account is partly to do with this being a “getting-back-in-the-game” effort rather than a full out race. Nonetheless the final mile is always something special but I’ll save that for the final installment.

Thanks for your interest!