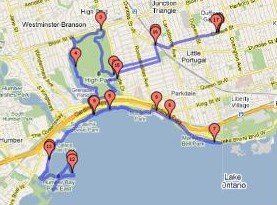 The run today was longest I have done in 2 1/2 years.  It was very tough mentally to get out the door as my usual long run pals, the “running philosophers”  are running tomorrow and our annual family gathering takes place tomorrow.  Our default day is Saturday.   I’ve tentatively named the group, “Smart Men and One Fast Woman”.  I will refrain from revealing too much about them, until they have had a chance to consult their lawyers about confidentiality and copyright issues. But I will say that they are wonderful company and I appreciate their companionship.

Route description: Start and end point is the West-End YMCA at Dovercourt and College.  Run west to High Park, enter at High Park Boulevard, up Centre Road to a path that circles the park.  Run counter-clockwise on the mainly shaded, wood chip trails and exit the Park at Colbourne Lodge drive.  Short jog south to the Martin Goodman trail and east to the end of Marilyn Bell Park, turn around and head west along the lake, over the Palace Pier bridge, through the butterfly garden.   Enter the spit-like, Humber Bay Park East on the path that goes by the monument that honours the victims of the Air India disaster.  Circle the park and then double back and run the same route to Colbourne Lodge Drive.  Enter High Park and run through the southeast quandant, exiting at High Park Boulevard and returning on the same route for the home stretch.