Over the past couple of weeks, I’ve been feeling the end of winter running blah’s and began to feel the need to be pushed to run faster.  And so, I was motivated to check out the action at the U of T Athletic Centre by joining the U of T Masters team as a guest, for a workout.

I have a long history of training at the Athletic Centre (AC) starting around 1982 while taking evening courses, which at that time made you eligible to use the athletic facilities.  A fixture at the track was the admirable Dave Steen, Olympic Bronze medal holder in the Decathlon, thrice named to the Olympic team.  It is easy for me to recall his image, poised and focused as he readied himself for a pole vault attempt. 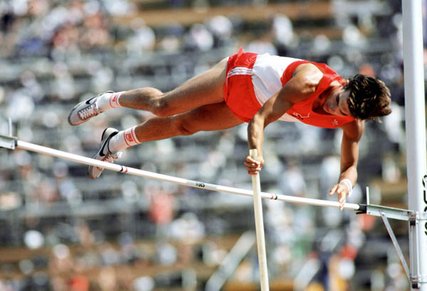 Then there were the years with Zeba Crook’s masters group, a precursor to the current masters group now being coached by Olympian Paul Osland and Mike Sherar, holder of world age-group records in the 800 meters.

So with a base of  barely any fast running I dove in and did 6 x 800 meters with a 1 1/2 minute rest.  I ran the final 800 meters the fastest in 3:25 and felt pleasantly fatigued afterward but wait . . . there is post-run circuit training and man, oh man that is grueling.  I find it hard to believe that doing 2 sets of 25 full body push-ups will help me to run faster along with a whole round of additional exercises.  This part was harder than the running part.  I’m going to have to tackle these, one exercise at a time.  As for the 800’s, I hope to get close to 3 minutes for those by the fall.

I ran into a few people I know including a former Princeton track star who once ran in races with the legendary Steve Prefontaine who famously said, “Somebody may beat me, but they are going to have to bleed to do it.” and “I run to see who has the most guts.”  Pre, as he was nicknamed is an icon of hard core running.  There are at least two movies about Steve Prefontaine, who died young in a car accident.  I also ran into a second cousin, who has joined the Masters Sprint group and a friend from over 30 years ago who is doing a PhD in kineseology.

The only drawback to these workouts is the late start.  For someone who often goes to bed around 9:30 p.m. and considers 6:30 a.m. the perfect time to start a run, doing hard track work at 7:00 p.m. is quite disorienting.  However a feeling of accomplishment kept me company as I jogged home and within 10 minutes of arriving home, consumed a sumptuous dinner of leftovers. I’ve said it once and I’ll say it again, food tastes better after a hard workout.

Well it is 9:47 p.m. and my body and brain are fried so good-night all.  I wonder how sore I will be tomorrow?

2 thoughts on “Cure for the Late-Winter Running Blues”