Back from our southwest swing, we enjoyed watching a film for which we saw a poster in a Taos, New Mexico coffee shop, a 1968 Sergio Leone film, “Once upon a Time in the West”. We revisited the desert in this film featuring Henry Fonda, Charles Bronson, Jason Robards and Claudia Cardinale. Apparently, it is a favourite of film aficionado’s and film makers including Quentin Tarantino, appearing on many an all-time, top one hundred list.

While in Arizona, I was eager to pay a visit to the Cowtown Boot Outlet. I am always on the hunt for stylish but comfortable footwear and blogged about this in the post titled RUBBER SOLES. One exception to the superior comfort of rubber soles is the cowboy boot. What is it that makes cowboy boots so comfortable? Granted, they are not the height of stylishness but they are certainly a little more lithe in appearance than my beloved Blundstones. My comfy footwear instincts were dead on and I was rewarded with a pair of black leather boots for $113.  Sadly there is no such outlet in Canada, not even in Alberta but if you are in the U.S. and in need of comfy boots –  you gotta go! 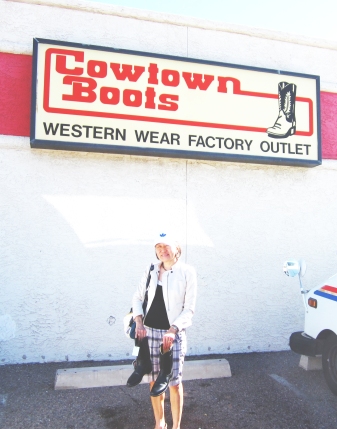 On my last run in Phoenix I was drawn to finish my 6 miles in South Mountain park despite the risk of re-injuring my tender ankle. Fortunately all went well and I left feeling ready to tackle speedwork and increase my mileage upon returning to Toronto.

Last run in the west for this cowgirl