Canal, river & parliament buildings converge for this fabulous view from my hotel room.

I’ve returned from my slightly-less-than-two-day-getaway in Ottawa, having missed a second day of posting for 2011. My from-the-airport post was pretty meagre, so I decided against a second thin offering yesterday.

Breakfast With a View

I started my mini-holiday with a 7 a.m. breakfast with a friend, in the hotel cafe. This friend has recently moved here from Toronto and it turns out that he is living in the Lebreton Flats neighbourhood, about one block from where we lived for some of of the five years we called Ottawa home.  We became friends while part of a running club at the University of Toronto, a group that was spearheaded by incomparable coach,  Zeba Crook, then grad-student, now professor in the Religion and Philosophy department at Ottawa’s Carelton University. Unfortunately, a get together with Zeb was not to be, as he is in that very busy phase, family life with two working parents and two young kids.

Our First Ottawa Home, a Heritage House on James Street in Centretown

After having a look at the basement fitness facility in the hotel, I resolved to run outdoors as the day was especially bright and I planned a route which encompassed our two Ottawa homes, two favourite parks and the YMCA-YWCA where I used to leave my son with the babysitting service while working out, until he graduated to the nursery school.

Our second home on Elm Street was our first home purchase.

I’ve written about my winter runs in Toronto but I had forgotten how much a slog winter running in Ottawa is because of the rarely-bare sidewalks. I’ve heard a lot about Yak Trax a unique coil system that clips onto shoes and gives you traction on ice and packed now and I’ll be buying a pair of these, the next time I visit Ottawa in the winter. I was slipping and sliding all over the place. Over my abbreviated run of 5 miles, there was one measly block of clear sidewalk. I had planned to do some speedwork but had no choice but to abandon this plan. 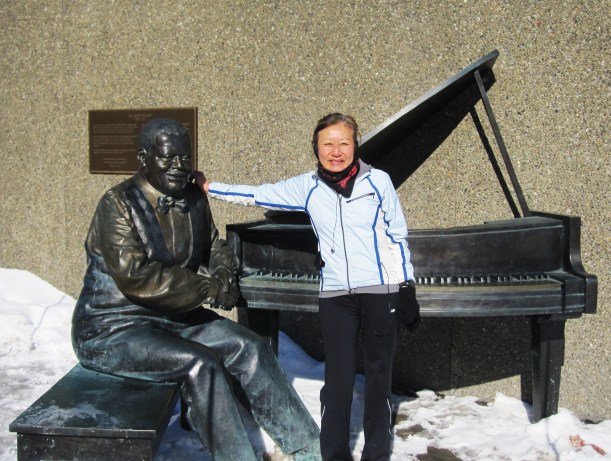 During my Ottawa days there was no such thing as a treadmill at the YMCA and there was no indoor track so it was very tough to run through the winter. I remember running along the canal in -40C weather, when I was stopped by a television camera crew, waiting to interview runners brave enough (or foolish enough) to run in the cold. So there you have it, my 15 seconds of Ottawa television fame.

As I returned to the center of town I checked out some of the Winterlude displays awaiting the weekend action. I think Winterlude now takes place over three weekends, rather than the former ten day stretch. I once took part in a Winterlude tradition, a Skate, Ski and Run Triathlon. In spite of the bad footing I enjoyed my little trip down memory lane and returned refreshed and eager to play tourist in the afternoon.

Winterlude Weekend around the corner.