I’ve added a link to my blog to a website honouring the late George Sheehan, the voice of the first running boom that began in the late-seventies. He wrote regularly for Runner’s World and captured the imagination of the many, who took up running during this first wave of enthusiasm for long distance running. His writing was a blend of pithy running one-liners like, “Don’t be concerned if running or exercise will add years to your life, be concerned with adding life to your years.” woven with an unrelenting stream of philosophical quotes to illustrate the best of the running experience. A William James quote “The strenuous life tastes better.” was one of his favourites. 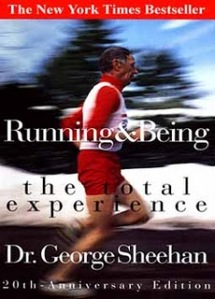 A favourite quote of mine came out of his constant reminder to listen to your body because, “We are an experiment of one.” Some have said that the first running boom was driven by type “A” overachievers, a mischaracterization, when one considers George Sheehan’s place as the most influential voice of that first boom.  His premiere work, Running and Being was a New York Times bestseller.

Find out more about George Sheehan by visiting www.georgesheehan.com a website created by his children to preserve the legacy of his contribution to the sport.

From the moment you become a spectator, everything is downhill.