In spite of having all the gear to run comfortably outdoors, I have run indoors for the past three days.  The usual Saturday run suspects were not available so I was left to my own devices.  In anticipation of sloppy and slippery conditions on sidewalks, I was committed to getting out early in order to run on (hopefully) cleared roads as much as possible.

My husband reminded me of one route I’ve used on days like this, a run to High Park with multiple loops around the 1.1 mile road circling Grenadier Restaurant.  He pointed out that he could drive to High Park and join me for a few loops.

As the day dawned and time constraints were considered, I decided that the most efficient way to get my 13 miler in was to run to the nearest treadmill.  The time it takes to go from my front door to a treadmill is under 2 minutes.  For longer runs, much time is saved on the treadmill as there are fewer stops and washrooms and water are always near-at-hand.

I left the house shortly after 7 a.m. and incidentally, I was not the first occupant of our home to be leaving for a workout.  Our roommate Alain was out the door, headed to play basketball, shortly before me.

I ran for over two hours and happily fell into a nice groove almost immediately.  I broke down the running time into 30 minute chunks with a little perk, when each segment was completed.  My rewards were chugs of Gatorade and checking my Blackberry.

While running, I spent time thinking about a National Geographic show I watched last night about climbers on the highest mountain in North America, Denali.  While watching this I emailed a nephew in Arizona who has climbed Denali to wish him Happy New Year.  A few years ago, I had blithely remarked, that climbing Denali was something I thought I might like to do one day.  His response was that it was a “very technical” climb.  After becoming more informed about the dangers of the trek and the number of people who have died attempting to do this, he probably should have told me that I have no idea what I am talking about.  He is a very diplomatic individual who obviously has great respect for his elders.

This led me to thinking about the Klondike Road Relay which I took part in a few years ago.  This relay goes from Skagway to Whitehorse and I was assigned the toughest leg which was a very hilly (Yukon size hills) 25K.  One third of my run was done in the dark of early morning and I was running into the sunrise, definitely one of my “rave runs”.

With this on my mind, I was surprised to see a map of the Pan American Highway appear before me on the BBC channel.  The show called Racing Green Endurance was documenting the journey of a race car driver along this network of highways stretching between Alaska and the southernmost tip of South America. 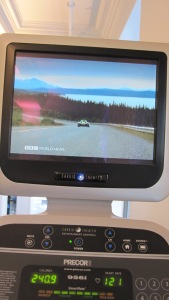 Another memory triggered of being on the Top of the World highway traveling in a RV with 3 siblings, their spouses and my son.  We were passed on this lonely dirt highway, close to Chicken, Alaska (population 3) by a caravan of colourful rally cars with checkered markings, the stuff of surrealism.  Perhaps these coincidences point the way to a return to the Klondike Road Relay.

Top of the World Highway

So between the television, the IPod, the Blackberry, the constant readout of my heartrate and these musings the time flew by and I returned home in good time.  I made it to my goal of 50 miles for the week, without expending too much stress in battling the elements and surviving the absence of my regular run pals.  It felt good!

Later in the day my husband and I stopped by the  Dark Horse Espresso Bar on Spadina two blocks north of Queen street.  As we drove along Queen street towards Spadina we noticed that another Dark Horse Cafe has opened west of Bathurst. 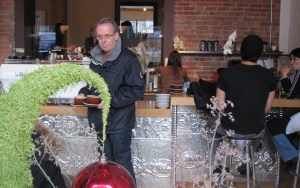 I first visited the Dark Horse a couple of summers ago with one of my four brothers, the brother who lives in the Yukon (Did you see that one coming?)  took me there.  As sometimes happens, it is the adventurous tourist who finds new places for the locals.  This brother is well-traveled and I blogged about our (sort of) chance meeting in Frankfurt, this fall.  He is an architect by trade but is also co-owner of a thriving Whitehorse coffee bar, the BAKED CAFE & BAKERY.

Finally . . . snippets from the Dr. Suess classic, “The Places You’ll Go” are verging on the ubiquitous but it is has been a favourite of mine since I bought it for my son when it was first published in 1990, the last Dr. Suess published before his death in 1991.

You’ll get mixed up, of course,
as you already know.
You’ll get mixed up
with many strange birds as you go.
So be sure when you step.
Step with care and great tact
and remember that Life’s
a Great Balancing Act.
Just never forget to be dexterous and deft.
And never mix up your right foot with your left.

So…
be your name Buxbaum or Bixby or Bray
or Mordecai Ali Van Allen O’Shea,
you’re off to Great Places!
Today is your day!
Your mountain is waiting.
So…get on your way!